I write sexy medieval romance adventures but, as some of you already know, I also write hot, dirty-sexy, fun contemporary romances. 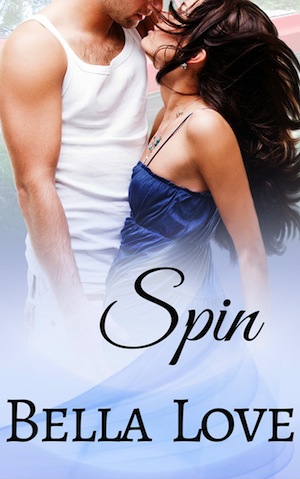 Yep. Check out the link on my website to Bella Love Books for proof.

More proof: here's an excerpt from the current work-in-progress, DARE, a continuation of Finn & Janey's story in SPIN. → → →

Warning: If you're not in the mood for hot and dirty, stop reading, now!  Otherwise, step into the parlor….   Or rather, the construction zone.

I stood back, shoulder against a beam, watching him beat a nail into submission in the hot rays of late afternoon sunlight.  When he was done, he stepped back and wiped the inside of his forearm across his face, wiping away sweat.

I grabbed a little hand towel from the work table and handed it over, along with the bottle of water.

He smiled and took the towel and wiped his face, then took the water and drank, then looked into my eyes for a second. “I’d kiss you, but I’m all sweaty,” he said in apology, holding up his dusty hands as proof.

“You would if I got your pretty shirt all sweaty.”

I looked away, definitely pouting now, and touched a few things on the work table while he drank the water.

“What you want, baby?” he said, all common man, water dropping off his chin.

“A problem to fix, maybe a disaster.  Sex.  A good movie. Something.”

“Spreadsheets got you down?” he said, teasing softly.

I twirled a penny I found on the table.  “I’m think I’ve got them conquered but….”

He leaned a shoulder against the beam and waited.

The penny dropped and I looked up. “They’re boring.”

Our eyes met. “And so you want dirty sex to crack the boredom,” he summarized.

Slowly, he smiled, then wiped his inner forearm over his face again.

Having unloaded on him, I turned away, surrendering to the fact that I had spreadsheets in my immediate future, not Finn doing bad boy things to me. “Well, I better get back to it. Come in inside when you’re ready to rescue me with dirty sex, and if I’m not dead yet, I’ll be waiting,” I said glumly, moving toward the door.

His hand grabbed me from behind and turned me and slammed me, not very gently, up against one of the construction beams. I gave a gasp of shock and stared at him.

He looked down at me, all hard male planes of jaw and chin. “How dirty?”

My body went electric. That’s all it took, a two-word question, with all the promise of Finn behind it, and my body ignited.

My wrists were gripped in one of his hard hands before the words were out. He grabbed a rope and circled it around my wrist, then knotted it and threw the excess over a high beam. It fell down and he tied it off. My wrist was bound.

“Tying you up,” he said, real casual, then did the same thing to my other hand, until I was trussed up like a horse in a stable, ready for grooming. My arms dangled, elbows bent at shoulder height, my wrists wrapped in soft cotton rope.

He crouched in front of me and took my calf in his hand. I went stock still, except for, well, my entire body, which began shaking. “Finn,” I whispered sternly, as if someone could hear us from a hundred and fifty acres away.

“Yeah?” he said, not looking up as he lashed another rope around my ankle.

“What are you doing?”

The rope tightened, just a little, around my ankle as he flung the end of it around the nearby post and snaked it back to him.  “I’m tying you up,” he said again, maybe a little impatient that we’d already had a similar conversation.

“Then I’m going to fuck your brains out.”

“Oh shit,” I whispered as he got to his feet and, now that I was all neatly knotted and trussed, he…went inside.

I heard the sound of water running. “What?”

“What are you doing?”

Oh, good. Not that I had specific fears about running water, but with Finn, you just never knew what he might have in mind.

And I loved it all.

Which scared me a lot.  Everything I thought I couldn’t do, couldn’t handle, Finn kept showing me I could.  God knows where we were headed next, emotionally speaking. And every other way.

He came back out, drying his hands on a towel, looking me over somewhat coolly.  His face revealed nothing, he looked impassive and remote, but a huge erection was pushing at the front of his jeans.

“You look pretty good,” he said distantly, his gaze raking down me.

“You’d look better with that shirt off though.”

“And your shorts pulled down.”

Electric threads of heat snapped through me as he came to me. His hand, hard and work-hardened, skimmed gently down the front of me, and my head went back a bit. “How much do you like this shirt?” he asked, real soft.

“I hate this shirt,” I panted.

He reached for a knife in his tool belt and slit it right the hell open, like I was some spoil of war, slit it open down the front of me, until it hung like a tattered flag of a distant past where I once cared about silk shirts.

I almost came right there. My body jerked with a hard gasp. “Oh God.”

He saw the jerk, heard the gasp,  and smiled.  “Like that, babe? You want it rough?”

“Oh, God.” I couldn’t do anything but take the Lord’s name in vain.

He snapped the blade shut and tossed it onto the work bench, then reached both hands to my shorts and unbuttoned them, then unzipped, then roughly shoved them down as far as they would go, to mid thigh.

And there I was, hanging with ripped open shirt and my denim shorts around my thighs, my ankles tied to post beams, waiting for Finn to fuck my brains out.

He smiled and unbuckled his tool belt, like he was in some strip show, and everything on me that was woman did its thing: my nipples got hard, my pussy got wet, my skin rippled with a wave of hot-cold chills that made my head jerk back.

“Take off your jeans,” I whispered, wanting more show.

I dragged my head back down. “‘Nope’?” I repeated, because that didn’t make a whole lot of sense.

“Oh God,” I whispered. I was doomed. And loving it.

If you have yet to read SPIN, you can get it here: