Claiming Her out in paperback!

December 5, 2016 | Cover Stuff, News, Release, Updates | Comments Off on Claiming Her out in paperback!

The paperback version of

Claiming Her is ready for you!

If you like reading paperback books, or just like to have them on the shelves to petting purposes, just time for the holidays…the paperback version of Claiming Her is out!

Cream paper, gorgeous font, the Renegades & Outlaws logos used for chapter breaks and scene breaks…so, so pretty. You're going to want a copy!  Maybe a perfect holiday gift for you or another historical romance-loving buddy??

The book is long–108K words of story + Author's Notes (and it was supposed to be a novella!) but it's still easy to hold, easy to read, and did I mention gorgeous??

The original cover shoot for the books, with those gorgeous tats on the was done by Jenn LeBlanc. One of her models spraypainted another model for the shoot, using an example I provided of the look of the tattoos.  Jenn also did the orignal cover.

Jaycee De Lorenzo of Sweet n' Spicy Designs did the full print version of the cover, and it's gorgeous. Did I already mention that?

Fun fact: The back cover image, underlying the text, features the ruins of Dunluce castle in Ireland, which is how I picture Rardove.  Like this: 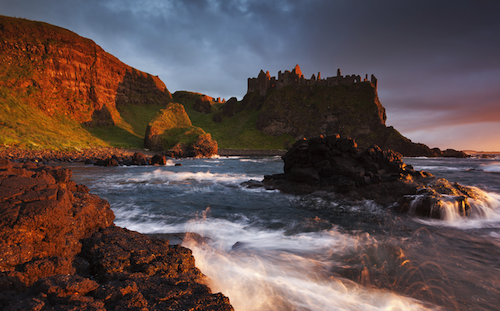 The interior of the book, with the fonts & the logos ued as chapter breaks, etc was done by Amy Atwell, who owns Author EMS.  She had her work cut out for her, because this is a BIG book: 108K words, plus additional Author's Notes. I told her I wanted it to be affordable (i.e. not too many oages) and readable, and…you know the drill, gorgeous.  She did it!!  So, so pretty.

Look at some of the pretty:

The print version is slightly expanded from the original ebook version.  There were a couple scenes that were nagging at me, scenes I knew needed to be fleshed out more, and this was the time to do it.

I've updated the book version as well!  If you've already purchased the ebook, you can easily get this updated file.  Just go into your digital ebook dashboard (whether that's at Amazon, or BN, or iTunes, or Kobo) and have the updated version delivered to you.  If you have any questions, contact their customer support and tell them you know there's an updated file for Claiming Her, and you'd like it delivered to your device.

I hope you love!!

You can buy the paperback at

Amazon or direct from Createspace.

And if you prefer the digital book, here are your links!

Merry Christmas, Happy Chanukah, and heartfelt Joy to us all!!

Hey kids!  Preempting today's weekly wrap-up  (and not because I was mostly a slug this week. No, it's not why.  Truly. Hey, stop with the skeptical frowns…)

No really, it's because I have…

A very temporary flash sale for you!

CAPTURED BY A CELTIC WARRIOR, the bestselling anthology I did with 3 writer friends, is on sale right now for 99c.  If you haven't got the antho yet, today's the day! 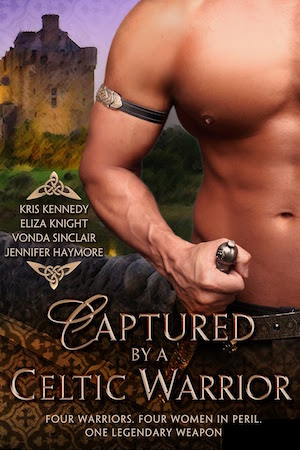 Let me break down the perhaps hidden tropes in the anthology, to help convince you need it NOW.

There are Celts. Three Scotsman and an Irishman. But wait, there's more!

There is an abundance of sexytimes. Let me repeat: abundance.

“Lass, you do not want what I have.” As if to prove it, he overturned his hand and dragged a calloused thumb roughly across her bottom lip.

It was a gasp of arousal, of desire and pent-up wanting, as far as she could retrieve the recollection from the dusty cabinet of her mind. It made her want to weep for the lost memory of it.

He watched her with dark, unreadable eyes, then slid his thumb back again, a little harder, rolling her lip down the slightest bit.

She tipped her head back and let her mouth part under the rough caress.

She stepped to him, pressed her breasts up against him. His thighs were hard against the front of hers, the hilts of his weapons bumped against her hips and belly, and dark, dangerous desire burned in his eyes. She wanted all of it. All of him.

“Show me.”  She slid her arms around his neck. “For I have been dying to be wanted the way you do.”

Have fun out there!