I was reading an article about a medieval hand grenade that was found by a worker at a power plant in Israel.

He found quite a few relics on the job site, some dating back 3,500 years, and when he passed away, his family them over the Israeli Antiquities Authority (thank you for doing this, family!)

We're still not entirely sure what Greek Fire was made of–there may have been multiple concoctions–although we do know there was naphtha, and likely quicklime, pine tar, and/or a few other ingredients like sulfur and/or pitch and/or saltpetre. And maybe some phosphorous for good measure?

It's a sticky liquid that basically attaches to whatever it hits, burns on contact with water, and is basically impossible to extinguish.

(If you're a Game of Thrones fan, think Wildfire!)

Greek Fire was around a long, long time ago. It was first recorded in 673, when it was launched from Greek ships via tubes mounted on the prows. They devastated the Arab attacking fleet. 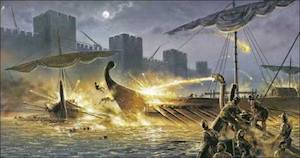 It was was applied to arrows and other weapons too.

Can you picture a thousand fiery arrows sailing up over your castle walls, or through the front line of your army?

They worked really, really well. It was a lethal combo–a liquid that basically adhered, and caught fire, and could not be extinguished with water, and often not even by smothering. In which case, you just had to wait 'til it burned itself out.

As you can imagine, it was popular in naval battles, where they'd toss the grenade at enemy ships and watch them burn.

(Editorializing Note: How did the Humans ever make this far?)

Anyhow…this grenade was embossed & the clay was decorated (image above).

I know, right? I'm here for the truly pressing questions.

Would they take the time to decorate a weapon that's going to explode on contact? Pride of craftsmanship? Was it made for some other purpose by a potter and bought/conscripted by the military for weaponry? Did it have some affect on the trajectory/speed of how the grenade would travel once thrown?

Honestly, I don't even think this counts as a Useless Info post.  It's more of a Useless Questions post.

If anyone have answers, fire away!  If not, enjoy the questions.

Tags: a whole lotta nothing