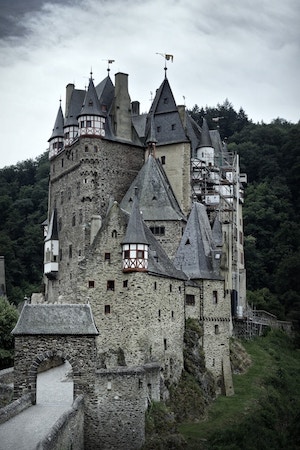 You look up at a castle and are blown away by the enormity of it, the majesty, the forgotten people who built it and hid behind it and fired arrows from it.

Those gorgeous castle walls, that guarded and hosted so many lives, had a whole lot of engineering that went into them.

First concern, of course, is to ensure you make your castle walls as strong as possible without unfeasible.

Medieval castle designers (yes, that was a job!) and engineers were hard at the job.

(We'll skip the fact that you needed to get the stones to build the walls for this article, but THAT could be a huge task.)

To strengthen the outer walls & the walls of the castle (i.e. the ‘keep'), the walls were often ‘buttressed,' i.e. built wider at the bottom than the top. This not only made them stronger without adding unnecessary weight, but it made them more difficult to undermine.

The word “undermine” come from the practice of digging tunnels under fortresses/castles/walls, erecting support posts as you went, then lighting a fire…and then running like hell before the tunnel collapsed behind you, bringing that corner of the fortress/castle/wall crashing down.

Triumph for the besiegers, disaster for those inside. 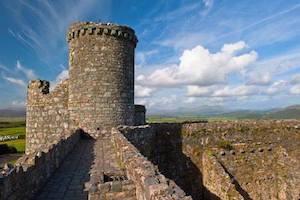 Speaking of that…round towers were far more difficult to undermine, and so towers began to be built rounded instead of square, especially along the outer walls.

Another reason for round towers is because they give a larger firing range. i.e. Fewer places for attackers to hide as they sneak up to the castle. You'd build the wall & towers in such a wall to create line of sight anywhere along the walls, trying to eliminate any places enemy attackers could hide as they crept in close. 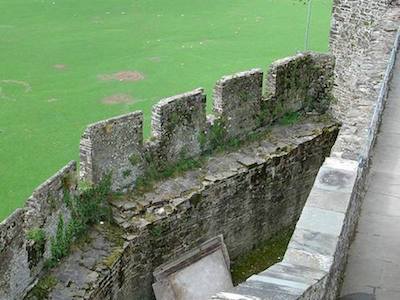 The walls themselves are just walls. The top of them though? The part that looks like teeth? Those are called the battlements.

They were to protect soldiers during, well…battle.

The were like a mini-wall at the outside edge of the main wall.

The top of main wall served as a walkway behind these barriers. Soldiers would patrol along them.

I can picture riding up on a horse and seeing sunlight glinting off the helms of the sentries on the wall. They're all armed with crossbows, and as you ride up on your horse, you're not sure of what sort of welcome you'll get…

In my story CLAIMING HER, the heroine first sees the hero from the battlement walls.

The empty spaces between are called embrasures. or ‘crenels.'  And the term for the process of adding these ‘teeth' to the top of your castle wall?  Crenellation. 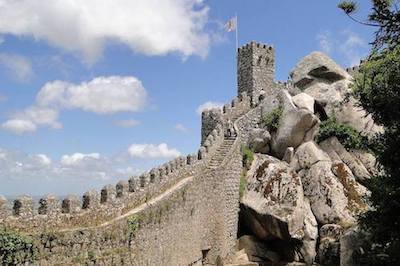 Did You Have To Get Permission From the King (or Queen)?

I know this is the very question you were asking, so I thought I'd address it.

There's some question about this.

The easy answer is yes, obviously. Fortifying your castle made it a lot more defensible, and a lot more dangerous. Specifically, more dangerous to the king. Because you'd be more capable of effectively rebelling against him.

So of course kings wanted some say over who was getting their defensible, dangerous game on.

But it's more tricky than that.

For all that we think of the middle ages as royal-led life for nobles, the peerage was really independent back the day.  And lordship–be it a king or baron–carried with it solemn responsibilities.  One of those was to protect your vassals.  And you couldn't NOT let your vassals protect themselves if you weren't going to/able to do it.

So yes, there were royal licenses to crenellate (i.e. fortify your castle), but the king had no right to refuse you.

“It was not in reality necessary to obtain a licence to crenellate to erect a fortified building…but a licence was prestigious and could be had for the asking.” (Coulson, 1982, p70) 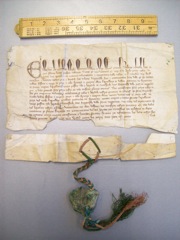 The original patent letter of Edward III to the burgesses of Kingston-upon-Hull confirming the licence by the late king for the strengthening their town with moats and a wall and to crenellate the wall (Source: http://www.gatehouse-gazetteer.info/LtoCren.html)

In the end, building a castle was an INSANELY huge expense. Staffing it was a lesser but relentless, unending one. Those realities probably did more ‘licensing' than any king.

As you'd expect, most licenses were given to men, and the gender of the grantee wasn't always mentioned, but interestingly, when it was, 11 women are named in grants to fortify.

Sadly, I could find no information about this kick-ass lady nurse who wanted to get her defensible, dangerous game on. If anyone knows more, let me know!

For anyone looking for a dry summary of royal licenses to crenellate–who are you and where have you been all my life?–here's a a couple links:

CLAIMING HER
DEFIANT
THE IRISH WARRIOR
THE CONQUEROR (debut)

There are castles galore in these stories, as well as hard heroes, strong heroines, and epic romantic adventure.