I was updating the ebook file of DEFIANT, and was reminded of what a bad man Jamie Lost is.  Really, not nice at all.  Eva is convinced he's a menace cast up from Hell to plague her, thwart her, endanger her…tempt her. 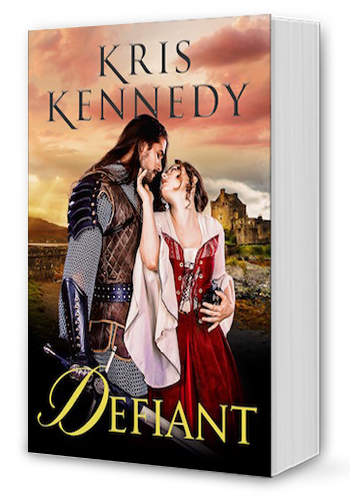 True on all counts.

If you haven't read DEFIANT yet and are in the mood for a big (110K words big!) adventure-strewn, road romance set in the time of King John and his not-so-chivalrous knights, go indulge yourself today!

…The rogue’s thick fingertips touched the middle of her back and pushed her the rest of the way inside the tavern.  Then he stepped in too and pointed to a table by the far wall.

Again with the commands.

She wanted to growl at him.

He tromped over the bulging plank floors toward the back counter that ran the length of the room, moving through flickering shadows of torchlight.

His hair-roughened square jaw could denote either a dull blade or a rough nature, but his hair, barely tethered by a leather strip, long and dark, bespoke only outlawry.

His cape was nondescript, calf-length. Beneath he wore a black, quilted surcoat, sleeveless, covering what she supposed was a mail shirt, although he wore a longer-sleeved tunic over it, as if to conceal what lay beneath. Both surcoat and tunic hung to mid-thigh, slit up the sides. Mucky knee-high boots completed the ensemble, but it was the dark hose, molded tight over his thighs, that kept Eva’s attention riveted far longer than was necessary.

He wore no insignia on his dark surcoat, bore no identifying colors, yet everyone either had a lord or was a lord. Even the most feared, ruthless mercenary, a Brabançon, identified himself with someone. Here in England, that usually meant the English king.

By the look in this one’s eye, ’twas a simple matter to place him there, among the terrible, ruthless sorts.

But somehow, she couldn’t believe something so…beautiful could be so awful.

And he was beautiful, to a hard line, masculine magnificence, all long, lean contours of hard heat and piercing eyes. A beast in his prime.

Her dark-eyed proteus looked over his shoulder, scowling when he saw she had not ‘come,’ was not ‘over there.’

A fissure of anger opened up inside her. She narrowed her eyes and, very softly, barked.

For the record, Jamie didn't like being barked at.

And so the adventure begins….

HAVE FUN IN THERE!