December 4, 2018 | Chatting, Claiming Her, Excerpts, I Love Books | Comments Off on Excerpt Party: Unwrapping Romance-Claiming Her 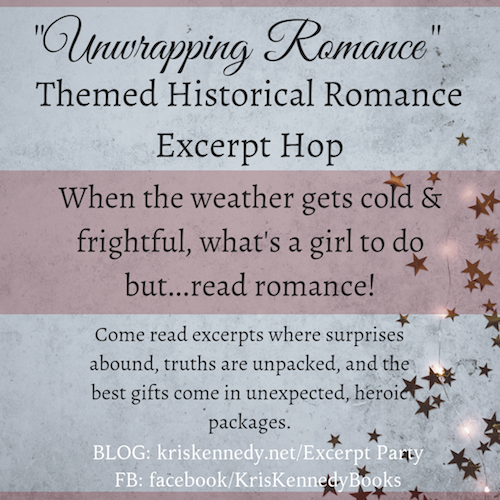 One of the best parts of the holiday season is gifts. And romance readers know the best gifts often come between the covers of a romance novel.

A group of my historical romance author friends & I have collected these fun, exciting excerpts from our stories to help you find great books to kick back with this hectic holiday season.

It's some of the best historical romance out there!

This one's from CLAIMING HER, a big, sexy, enemies-to-lovers romp through Elizabethan Ireland.

Here's an excerpt from the second surprise from the opening scenes. 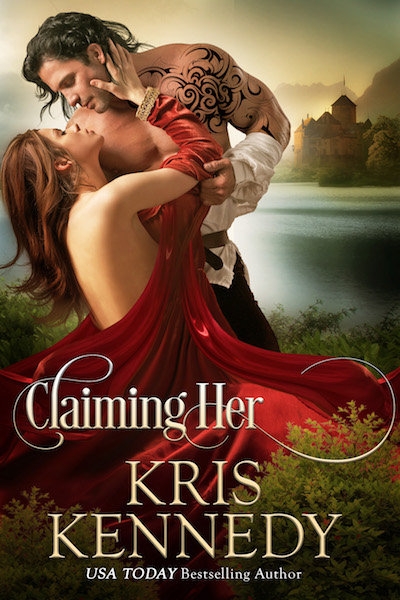 Aodh Mac Con Rardove has returned to Ireland and taken the castle the Queen of England refused to give him.  He intends to conquer everything: the castle, the lands, the lady.
Unfortunately, this lady has no intention of being conquered.

He must find a way to win her…or lose everything he's fought for his whole life.

(Note: Hero's name is Irish, and pronounced like the beginning of ‘Aidan.')

…She stepped back, her lips parting. The paleness in her cheeks went even paler. He’d shocked her.

The realization caused a small, strange tinge of disappointment, that a woman who’d held an English castle beyond the Pale with only ten men would be shocked by such a thing. It seemed somehow…diminishing. But then, Aodh had a taste for rebellion today, and nothing but more of the same would serve.

A movement at the far end of the hall caught his attention. One of his captains, Cormac, poked his head through a door, caught his eye and nodded, then ducked back out. Good. They’d made it to the north side, which meant they’d secured the entire castle. Rardove was his.

And so where was the hot satisfaction of conquest? The rush of triumph? Where was…everything?

Lying at the bottom of the same cold pit that had marked his life for too many years to count, no doubt. Intrigues, battle, courtly maneuvers, it was all the same: naught.

Apparently even coups of castles did not rise to the level of interest anymore.

He turned his attention back to Katarina. “My lady, if you will—”

All he saw was a blur of green silk, then her small, bunched fist smashed into his face.

The impact, hard and square, landed directly on his jaw.

Caught utterly unaware as he’d never been before–never, not even when his father's head had been cut off—Aodh reeled sideways.

The retreat gave enough room for her to launch herself forward. She slammed her shoulder directly into his ribs so hard and fast he grunted. He stumbled backward and hit the ground, her on top, twisting and kicking.

She jammed a knee into his bollocks, and he doubled over protectively, at which point she grabbed one of his fingers and twisted it back almost to breaking. Her other hand—so sinuous and slender it was all but ungrippable—snaked between their writhing bodies and tugged his accursed dagger out of its sheath.

With a roar, he lunged up off the ground, lifting her with him. Predictably—dimly, he noted he was already predicting things about her—she wrestled like a hellcat. Whirling hair, arms, legs. Kicking, biting, punching, swiping with the knife.

He caught hold of the feminine fist snaked around the hilt of his blade and slammed it to the wall above her head, gripping her wrist so hard she cried out, but she did not, of note, stop fighting.

He finally had to pin her to the wall with his entire body, her toes dangling half a foot in the air, their faces pressed together, cheek to cheek, until he stilled everything that was writhing and flailing and kicking on her curving, rampant, berserker body.

Fire burned in his veins, urging him to smash and destroy. He reached over with his other hand and wrenched the blade out of her grip, then tossed it to the ground behind him.

He inhaled slowly, forcing himself to calm. They stood like this for a moment, her body pinned between his and the wall. He supposed she could still kick his shins, but she’d impact against his greaves, and it would hurt her far more than him.

She seemed to agree. At least, she didn’t move.

He pulled back a few inches and let her feet drop to the ground. Breathing fast, she flung her head, spraying hair across her face. It was pale and beautiful, with slim, dark brows arcing over what appeared to be intelligent brown eyes. A shocking discovery.

“If you were a man, I would kill you right now,” he said in a low voice.

He waited for her response—everything now was a test, every moment a potential tipping point. Would she recoil? Be wise and retreat, apologize, surrender, run scared?

She shifted the only thing he didn’t have restrained, her left hand, and laid what turned out to be the cold edge of a blade against the side of his throat.

“If I were a man, sir,” she whispered back, “you would already be dead.”

A rush went through him, hot and intense. “You are left-handed,” he observed grimly.

A humming filled his stomach. He’d come for battle, and that this slim audacious woman had given it to him–undefended, in a hopeless situation, outmatched and overpowered–bespoke great boldness. Of a kind he’d not seen in a long time.

Either that, or idiocy.

She did not appear idiotic. Of course, she’d not appeared reckless either, out in the bailey. She’d seemed calm, clever, pale, and beautiful. Then she'd launched her body into his and turned into a bold, roaring-mad hellcat.

Perhaps everything in her was latent. Who knew, idiocy might rear its head at any moment. Or more boldness.

Although it was difficult to see how she could become more bold than she was at the moment.

Small wisps of hair brushed beside her mouth. Aodh knew battle and fights; her lips ought to be dry with fear, parched and tight. But they were wet. Parted and wet, her chin up, her cheeks a sort of hot red. Her slim body was pressed hard against his, female curves barely detectable through his armor. But the vivid flush of her was clear.

Her mad, energizing, fearless self was the clearest thing on his mind.

That and the blade pressed against his neck.

He laughed low in his throat. It had been a long time since he’d felt this hum inside him. Since he'd felt this energized, this vital.

He leaned closer until his mouth was an inch from hers, until he felt the honed edge of his own blade indent the flesh of his throat.

I wonder if she'll drop it….

Sign up for the newsletter to get release news & special deals on all the books.

Time to check out all the other amazing excerpts!

Hop over to each one and enjoy the romantic surprises.

Tags: a whole lotta nothing, booklove, Claiming Her, excerpts, intro the hero