I'm addicted to research.  There, I admit it.

I spend way too much money on research books, and way too much time reading them.  While Oxford University Press should just go ahead and open up a corporate account for me, my husband remains tolerant but unamused. Especially when half the books are for research on a book I'm not even writing. Yet.

Partly, this is because an author has to know way more about the topics used in her books than she'll ever actually put on the page, because after all, it's a story, not a non-fiction treatise.

This, of course, is my excuse.

It's the way I permit myself to descend into the rabbit hole of Totally Unnecessary Research.  You can picture me leaping down a large hole, looking over my shoulder, smiling and waving, calling, “I'll be just a minute!”

I'm never just a minute.  Go on and leave without me.

When I'm at work on the contemporaries, I find myself digging deep into crazy biotech, when I've already decided my tech-y secondary character will not be doing BIOtech, just straight coding, computer tech.

And yet…addict.  Because have you ever researched biotech, then thought of ways to twist it to nefarious purposes???  It's insanely frightening and compelling.

A skirmish with smugglers from Finland at the Russian border, 1853, by Vasily Hudyakov

But my biggest weakness is historical research. Even when writing the contemps, I find myself on websites for medieval spice trade, or with a book sitting open beside me that discusses smuggling in 17th c.

These are not useful research topics for a contemporary story, not unless a character in the books happens to be studying the spice trade or the history of smuggling.  Which my hero and heroine are not.

This can become troublesome.  One must choose a story and proceed, not get distracted by all the other exciting stories she could be telling.

While writing CLAIMING HER, I found myself studying far more than was necessary about how 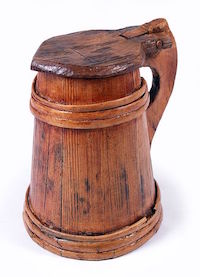 alcoholic beverages were stored in the late 16th c.  I mean, really.  I needed my heroine to store whisky, and suddenly I'm learning about the history of bottling beer.

For instance, did you know bottled beer was already used by the late 16th century?  They even used expensive glass to do so (beer was sold in glass bottles in 1561 in Germany), although stoneware was more commonly used.  By the early 1600's, the practice of bottling beer was well-established, and the debate was on: which is better, bottled beer or beer from a keg?

Do you have a preference??

(Note: in 1492, the Scottish Parliament prohibited any adulteration of beer or wine on punishment of death.  Careful out there, beer adulterers.) 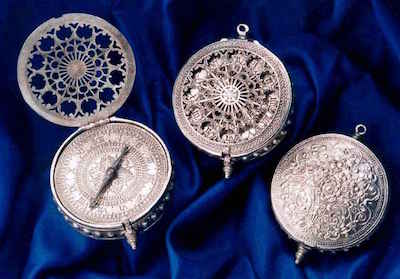 By 1524, German inventor Peter Henlein used the invention of mainspring to create watches that did not require falling weights as the source of their power, and voila: portable clocks.

They caught on quickly. Initially quite bulky and worn around the neck like a pendant, the later adoption of screws reduced their bulk, and by the third-quarter of the 1600's, were small enough to be housed in, well…a pocket. (fyi, screws used to be made BY HAND, obviously, so individuals were doing the extremely time-consuming task of filing threads and cutting slots in the heads, so screws were of variable thread depth & quality.  The first screw factory in England, in 1776, with a patented screw-making machine, failed miserably. It's not clear why, though, because…)

Gah!  See, it's happening as I speak! So much for my parenthesis. One thing leads to another, to another…

Back on topic….I had a wonderful scene where the hero in CLAIMING HER (set in 1589) has a pocket watch, and it totally makes the heroine swoon. Unfortunately, I had to cut it. As it was one of the inspirations for the story, cutting it was like carving out a little part of me. But for various reasons, the pocket watch scene wasn't going to work, so out it came.

But I kept researching the damned things. Because…addict.

Fortunately, not all is wasted. Maybe none is. Because if the historical detail is organically connected to the story, then it does more than just sit there as a prop.  It bolsters/reveals/reverses something that's core to the characters. And so I learn something far more important that factoid A or B.  I learn about the hero & the heroine, even if the historical detail must be surgically removed.

Writing the early versions of the pocket watch scene revealed Aodh & Katarina to me.  Katarina has been stuck out in her lonely castle beyond The Pale for many years, and did not expect this barbaric Irishman to upend her world. To be, in fact, the opposite of barbaric. To bring her etched silver and silk and news from faraway places from men he called friends. To show her maps of unknown worlds. To beam prisms of light into the dark corners of her life, and prove to her anything is possible. Anything at all. Even loving a rebellious, treasonous Irishman.

So, I guess this is why I waste my time.  Because it lights my fire.  And reveals the truths of my characters.

Which maybe doesn't count as wasted time after all.

Do you have interests that make you “waste your time”?

Oh, Kris, I have this addiction also. Sadly, I haven’t “lost myself” in quite some time now. Not sure what’s actually up with me…. I crave reading and exploring, as I call it, but I haven’t done much of either this year. Maybe a slump, of sorts? The good thing about this addiction is you haven’t lost a thing by going off on other tracks from where you started. You’ve only gained knowledge. And that’s the beauty of it. :)

Leah, I know how that feels! It’s like a loss, isn’t it? You want to lose yourself in something, but can’t. Are you slumping for fiction as well as non-fiction?

Yep. I haven’t been much in a mood to read anything….sigh….