Got a new cover for Claiming Her! 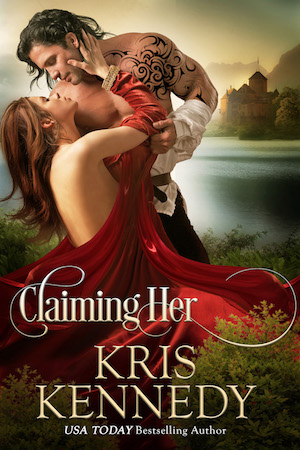 Why a new cover?, you may ask.

The model shot on the original  was gorgeous, and I adored it. But the cover itself wasn't getting any attention. So a facelift was in order. I still have the rights to the original image, and because I love it so much, maybe one day I'll see if I can make it work!

In the meantime…maybe you would like a little excerpt from Claiming Her, since we're revisiting it today?

…The clerk’s voice droned on in Latin, and the Irish Hound was replying—in Latin—then the clerk read the terms aloud in French, and then in English, to ensure no confusion—oh, there was nothing but confusion—while Walter’s grim, furious, yet vaguely triumphant face glared at her.

She had done precisely what she’d told him not to do: seriously underestimated Aodh Mac Con.

The pen in her hand shook slightly. She could not catch her breath. Everyone stared. Silence spread through the hall. A boot shuffled, leather creaked, a burning log shifted, then fell into hot ash in the hearth. All she had to do was sign her name.

If she signed, she was doomed.

A drop of bright red ink hung, suspended, at the tip of the pen in her hand. Aodh’s name was already on the page, scrawled in gorgeous, bold, educated letters, large enough to be read in Windsor.

He was afraid of nothing. This castle, this rebellion, Katarina—he claimed it all.

Trembling, she looked up into his eyes.

“Aodh,” she whispered. It slipped out helplessly.

He went into motion. “Leave us,” he ordered, taking the pen from her hand.

And once again, the people in the hall dispersed like pebbles running down a hill. His clerk and hers, the witnesses and soldiers, everyone turned and left, until she and Aodh were once again alone.

Shaking, she stood, head down, staring at the ground, braced for his fury. That is what men did, vent their fury. It would be over soon enough. He circled her once; she watched his boots make the circuit around her body.

“What is it?” he asked while behind her.

She inhaled, shook her head, looked at the papers, the signatures, then her gaze dropped to his sword. Everything about this was a conquest.

He’d followed her glance at his sword, and with a swift sweep of his hands, he unbuckled it and let it fall to the ground. It clattered in a heap. He stepped over it and came nearer.

“Why are you saying no?”

“Because I would lose everything.”

“Och, lass, you’ve already lost everything. All you can do now is gain.”

She gave a broken laugh. “That is no good answer.”

His gaze roved over her face, then he took the last, natural step and drew up before her. “Listen to me.”

“No.” She could not listen to his low, resonate persuasions, spoken in that dark Irish lilt, the one that tempted as if it were touch.

He curled a finger beneath her chin and tipped her face up. “You cannot think it would have gone well for you when Bertrand of Bridge arrived? The queen’s interrogator?”

She gasped. “Wh-what do you know of it?”

“In England, they are calling you a traitor. A priest-lover. An unwed dye-witch.”

Shock made her hands fly to his chest. Fear curled them into fists, bunching his tunic. “No.”

“Aye. So now, maybe, it is not so mad an idea to have something standing between you and England.”

“Oh no,” she whispered as he slid his fingers to the back of her neck and guided her closer, against the towering length of him, until they were touching from knees to stomach.

Confusion washed through her, an amalgam of shifting emotions. Protect her? When he was the danger, England her salvation?

Protect her? No one protected Katarina. She was the protector, of Rardove, of the people within, of the queen’s rights in Ireland.

But that this warlord had offered…

Their mouths were so close she could feel his breath on her. She wanted his breath.

She leaned back against the table before her knees buckled, her neck arching as he touched his lips to the base of her throat. A wash of chills rained down her body so potent she almost did not notice the wide palm now skimming down her waist. She was far too focused on the other hand that had plunged into her hair, fingers splayed. He fisted his hand and tugged her head back. The pressure was hard and exquisite, the pleasure undeniable. Unstoppable.

The breath burst from her, a loud, stuttered gasp in the silent, echoing room.

Head bent, he worked his way up the line of her throat and chin, his tongue and teeth an assault of carnal skill and, wasting no time on preludes or introduction, when he reached the summit of her mouth, he simply claimed her. Slanted his mouth over hers, completed his conquest of Rardove by sliding his tongue between her already-parted lips, and deconstructed every notion she’d ever had of who she was, and what passion meant.

Showing her what he meant by their ‘truth.’

Another Friday, another yay! Hope your week was great!  Mine was busy with mostly non-writerly stuff.

Been working on a contemporary romance.  There are lots of alpha dog sexytime scenes.  Be prepared. Be very prepared….

Loads of promo the past couple weeks to spread the word about King's Warrior. I'm sometimes astonished at how much work it takes to sell books.  For the record, I'm a terrible, terrible saleswoman.

“…medieval romances that manage to capture, on the one hand, the hard, almost epic romanticism of an era filled with castles, brigands, and nobles, and on the other, romances that appeal to modern sensibilities with searingly hot romances with plots that start at adventure and never stop.”

All About Romance reviewed King's Warrior and said, “King’s Warrior is full of action and Ms. Kennedy is a superb storyteller…I’d definitely recommend King’s Warrior to you.”

I was especially touched by one reader's review over at Amazon, who said, “This felt so…E P I C. Well done, dear author. And thank you. You made Magdalena, our intrepid auburn-haired heroine, even more sensual, capably resourceful, and fierce. You also gave her grace. OMG I love her!! Our, Tadhg? You made him truly heroic….you gave him an inner voice so profound, unsure, yet resolved, that all I wanted was what HE wanted. To go home.”

New Cover for Claiming Her

Getting a new cover for Claiming Her!!  It's super pretty.  It'll be up on bookseller sites soon. I hope you love it!
I gave newsletter readers a sneak peek yesterday.  If you aren't getting the newsletter, it's free & easy–just drop your email address in the the sign-up form on the sidebar of every page of my website.  See?? —>

…to all the author friends who talked up King's Warrior in their newsletters & social media. Here are some of the book deals & releases I've shared in my newsletter this week (are you on the newsletter??  Come on over–it's fun! I only send it when there's book news, and I make sure you get all the news first.  For instance, see the next item….)

Vanessa Kelly, has a new short story, Three Renegades and A Baby, part of her RENEGADE ROYALS series, and it's only 99 cents!

When a former crime lord and two lethal spies take on the task of caring for a baby girl found on the doorstep, it’s up to Jack Easton, Marquess of Lendale, to decide who does the best job. But none of the men have any idea how much mayhem one little girl can create!

March 7, 2017 | News | Comments Off on Availability Update: Claiming Her

Claiming Her is now available at Google Play! 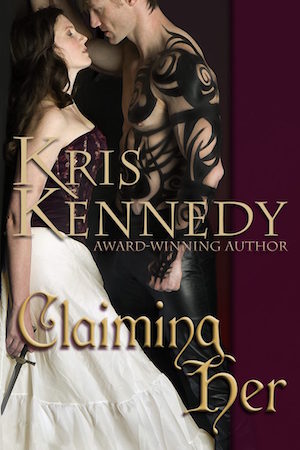 So happy I can now offer my Google Play reader peeps the story!

What happens when a big bad warrior hero intent on conquering everything in his path comes up against a strong-willed heroine who has no intention of being conquered?

If you prefer other vendors, here are your links!