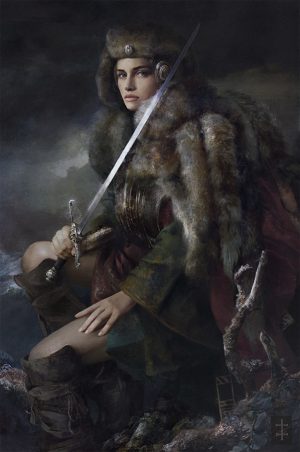 The Danish king didn't trust the family much either, and when Swein Forkbeard, King of Denmark, invaded England in 1013/14, even more of Aelfgifu's family members were killed.

The family had no intention of turning their daughter and her son over to be killed, so they sent Aelfgifu, the baby, and the body of Cnut's father back to Denmark.  She got pregnant again and gave birth to Harold Harefoot, who would become King of England.

This was fine with the English Church, as they didn't recognize the first marriage. It was likely acceptable in Aelfgifu's world as well. Still…it's gotta hurt.

Turns out Cnut's other wife, Emma of Normandy, really didn't like Aelfgifu.

Harthacnut rolled back into town (lots of rolling here) and took over of kingdom pretty peacefully, although he apparently still had some bad feelings toward his step-brother, because he unearthed Harold's body from where it was buried in Westminster, threw it into a fen, then dumped it in the River Thames. It was picked up by a fisherman who took it to the Danes, and Harold was once again given a decent burial in London.

This doesn't seem right.  Daughter of a great family stripped down by two kings, wife of a king, mother of a king, Queen Regent, and we don't even know about the end of her life.

I'm not saying she was a paragon of ideals we'd aspire to today…although maybe she was.  And honestly, I'm fed up with people anyhow, and find our aspirations pretty low & base a lot of the time.

(Postscript: I did a search for “moxie woman,” looking for a nice image to wrap things up for us here.  I…didn't find one. I  found a lot of pictures of small dolls, a surprising number of full-sized naked women who didn't appear to be doing anything that required ‘moxie,' and one happy woman holding a big-ass check in the amount of $16,423.69.  Perhaps she was a moxie award winner.  In any event, nothing quite captured what I was going for, so we're signing off bare of pictures.  Let me know if you have any!)