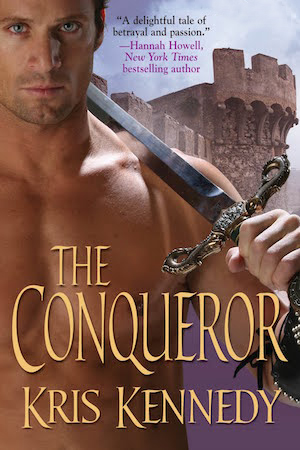 …Fad­ing into uncon­scious­ness, Gwyn didn’t realise the weight was gone until the war­rior stood above her, sword dan­gling in hand, blood streak­ing down the side of his face.

Beside her lay the bloody-headed sol­dier, rather more blood­ied now. His skull was split in two. Already his innards were ooz­ing out, a pulpy mass, mix­ing with the mud.

Gwyn’s mouth began mov­ing but no sounds came out. In the dis­tance, the sounds of run­ning foot­steps faded away. Her sav­iour spun as if to give chase, then, with a few muf­fled words, turned back.

“Is he dead?” she whis­pered, as if some­one might hear her and some­how not have noticed the com­bat of a moment ago. As if the hacked body might still, some­how, hold life and be awak­ened by her words.

Dark, shad­owed eyes flicked to the prone body. “Quite.” He kicked the body away and stretched out a gloved hand. “Come.”

“All the way.” He held his hand in front of her nose.

Flat on her back, Gwyn frowned. A gnash­ing pain crowded into the back of her head. “I am more afraid of being haunted if he is fully dead, sirrah.”

This brought a moment of quiet. “Are you get­ting up or not?”

“Have you killed so many men, that one more means naught?”

He straight­ened and glanced around the deserted road. When he turned back, she could see only the gleam of his teeth as he smiled grimly. “And you, lady, have you been on so few high­ways that you know not the dan­ger of rid­ing on them alone?”

She opened her mouth, shut it again.

“Know you so lit­tle of men that you would think one such as he is not bet­ter off dead?”

Again he ges­tured to the man’s body. His smile receded as he ran his fin­gers through his hair, ruf­fling the dark locks into damp spikes.

“Know you how weary I am, and that I wish only to be home?”

He tow­ered above her out­stretched body but she was not afraid. Certes, he’d just saved her life. Why­fore be affrightened?

“You,” he reached down and grabbed her hand, “do not lis­ten well.”

« Return to The Conqueror

“With her debut release, Kris Kennedy has given us a stunning tale of betrayal and redemption. … On the surface this would seem to be just another historical romance novel, but hidden in it’s depths are real treasures.”

“If you’ve been looking for a strong Medieval romance, The Conqueror is an impressive debut, indeed.”

— All About Romance, Grade B+

“If you’re an old-school romance fan, especially one who adores medievals? Yeah, just stop reading my review right now, run out and buy The Conqueror by Kris Kennedy. It has everything you’ll want, and more (!), all for the bargain basement price of $3.99. … It’s easy to see why this book finaled for RWA’s Golden Heart award. It’s really a very accomplished debut novel, and fans of medievals should just beat the Christmas rush and start rejoicing now.”

“I blushed, smiled, and then happily went back and started reading THE CONQUEROR again…”