On Young Noble Irishmen in England During Queen Elizabeth’s Reign

Aodh Mac Con Rardove is pure fiction, mores the pity, but there was a real life Irish clan chief, Hugh O’Neill (1550–1616), who would have been a contemporary of Aodh’s. Indeed, Aodh mentions him in the Epilogue.

I did not base Aodh on the real life Hugh O'Neill; in fact, when I started writing I did not even consciously think of Hugh, although of course I knew of him, as one of the great Irish earls who fled during the infamous Flight of the Earls in 1607. But Hugh O’Neill had many of the same experiences as Aodh (or vice versa, I suppose), and if you’re interested in Irish history, I thought you might enjoy this.

Brought up in England after his father was killed by warring factions in the ongoing battle for supremacy of the Irish O’Neill dynasty (derbfine), Hugh (aka: Aodh!) was Dublin’s choice to inherit the English-recognized O’Neill lordship and the title Earl of Tyrone. To protect him—and indoctrinate him—Hugh was sent to England by the then-justiciar Sir Henry Sidney.

Hugh was raised both in England and out on the Pale in Ireland by English families, and as he grew, became known as the “little rascal horse boy.”  For much of his young life, he was raised as a royal ward at the English Court, ant that meant Society with a capital S.  He interacted with other young noblemen–English, Irish, Spanish–and was taught the ‘new religion’ (Protestantism), and generally indoctrinated into English ways.

Then, when he was 17, he was sent back to inherit the title Earl of Tyrone and rule in Ireland…as England’s loyal man.

All seemed well. The training apparently took: Hugh encouraged a court-like life in his Irish world. He dressed his sons like English courtiers, trained them to speak English, and in all ways, encouraged a refined life—an English life.  As was true for many Irishmen, he served in the English army, and commanded a troop of cavalry in the Munster wars against Desmond (the ones Aodh’s father and grandfathers were killed/captured in.)

But no matter how Hugh thought he had permission to straddle worlds,  the English world is not the Irish world, and when it came time for the O’Neill clan to choose their new leader, Hugh put himself forward for the role.

Unfortunately for Hugh, they didn’t pick him.  They inaugurated Turlogh, Hugh's rival for power, as The O'Neill, king of the O'Neill's.

This did not sit well with Hugh.  It rankled.  A lot.

Being one of many English noblemen to serve a self-interested and distant Crown didn’t compare to being a clan chief. Hugh started making sounds of discontent.

It was probably also quite difficult for him to watch the ‘Plantations' happening.  At her wit's end on how to subdue the endlessly rebellious North, England started making encouraging hardy and generally otherwise-hopeless English and Scottish settlers to take up residence on Irish lands.

Clever, well-educated Hugh could no doubt see a future where they would begin to encroach on his lands too. Rebellions were sparking up all over Ireland on just this issue.

In retrospect, what happens next seems inevitable.

When Turlogh finally died a few years later (& only after much drama), guess who took over as chief of the O'Neill tribe?

Yep. Hugh became their clan leader, and took on the outlawed Gaelic title ‘The O’Neill.’

England's retribution came swift and sure. For this and other offenses (including supporting & finally leading an attack against English forces) Hugh was declared a traitor by the English Crown.

The story gets sad after this.

Hugh and other Irish fought many battles against England and had some brilliant successes, but eventually Hugh fled Ireland in 1607, along with many other great Irish earls (an event known as the Flight of the Earls).  Irish culture, which had been experiencing a renaissance under great Irish lords like Hugh, was all but extinguished after this.

The Plantations began in earnest–where people from England and Scotland were encouraged to come and take land in Ireland for themselves.

Irish chiefs were forced to surrender their lands and native titles, and have them regranted…but now as subjects of the English Crown. King James issued “A Proclamation touching the Earles of Tyrone and Tyrconnell” in November 1607, where he labeled the earls treasonous, preparing for the forfeiture of their lands and titles.

Over the subsequent decades, there were native and “Old English' uprisings and rebellions, but by the end of the 1650's, England, through Cromwell, had entirely conquered Ireland. Englishmen with no roots or ties to Ireland were the dominant landowners.  They ruled everything.

For his part, Hugh O’Neill always meant to return to Ireland. He continually sought allies in Rome and beyond to come back and reclaim his Irish lands, but he died before his ambitions could be realized. English dominion in the north of Ireland continued essentially unchecked for centuries.

That’s part of why I wanted Rardove to be what it was. A place where Irish culture could go on, a bulwark for its magic and passion, a safe haven that could protect the spirit of Ireland, through the trials and tribulations of the centuries to come.

Hopefully you can imagine Aodh and Katy being the sort of strong, principled people who would start a lineage that could do just that.

This is a small point, but I know some of you love behind-the-scenes peeks at research, so I thought I’d share this one.

As I was writing, I realized that although Ré and Cormac and even Bran might be experienced seamen, there was no way they were going to get a large ship across the Irish Sea with a three man crew to rescue Aodh. Additionally, they needed to be able to cruise into a small cove, Renegades Cove.

After much research on the matter (it’s amazing the amount of research that goes into a story element that’s barely alluded to), I realized they had to have traveled in a pinnace. 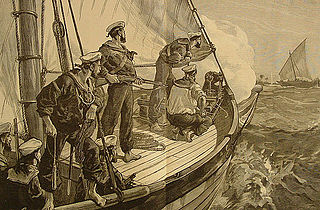 Sturdy enough to undertake long open-water voyages and handy enough to use close to shore, it was used as a warship, a merchant ship, and quite often as a ‘tender,' a smaller boat used to ferry goods and passengers to & from larger ships. It could be rowed or sailed, and could be manned by a small crew.

Here’s a great picture of one: https://en.wikipedia.org/wiki/File:DhowChase.jpg

Now you can picture Katy and the boys traveling over the Irish Sea to rescue Aodh!

Originally, I planned to have Aodh give Katarina a gift of Icelandic spar (Viking sunspot) that was used by seamen in the Elizabethan era (and before) to help them navigate, but the spar does not refract light in the same way as a prism does, so I went all-in on a prism as one of his many gifts of seduction to the woman who lit his fire.

Elizabethans knew of prisms as novelties, although scientific studies and ‘proof' about refraction and the nature of light wasn't on the scene until years later.

But the concept of refraction goes way back, to the 10th century, when Muslim physicist and philosopher, Al-Hasan Ibn al-Haytham (964-1014) first introduced the concept.

Known as “Ahazen” in the West, he worked in Iraq & Egypt, and wrote seminal works on the nature of light and optics. He introduced the law of refraction, and is reputed to have written over 90 books, including his seminal work, the Book of Optics.

In the 13th century, glass workers were already creating spectacles based on their discovery of the ‘coverging lens'  (Fun Fact: the heroine in DECEPTION wears a pair!)

The first refracting telescopes appeared in the Netherlands in the first decade of the 1600's, and soon after, Galileo Galilei made his own version.

Later that century, Isaac Newton conducted his groundbreaking experiment, showing that white light contained all the colors, and wasn't being ‘corrupted' when it changed into a component color, such as red or blue. He proved this by passing a single beam of light through a prism, thus splitting it into component parts–the rainbow–then back through another prism, ‘recombining' it into a single beam of white light.

In Claiming Her, I recreated that experiment for you with Aodh & Katarina. 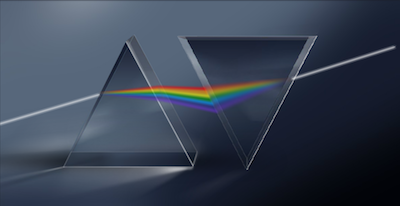 Technically, we have no evidence that someone in 1588 would have understood the way the light was breaking into its component ‘parts', nor would have thought to pass light through two prisms. Newton's experiment was almost a century in the future.

But I admit to a bit of rebelliousness when I’m told, “This is the way it was—the only way it was,” or “People did not know/use this word before such-and-such a date.”

Newtown experimented and validated and, perhaps most importantly, published. But he surely wasn’t the first to think, or to wonder, to suspect, or even to experiment.

Scientific discovery and understanding was proceeding at breakneck speed throughout the era, and there were inquisitive and curious people everywhere.  I believe people who worked around prisms and light and water, and depended on them for their livelihood, might know a thing or two. Men such as seamen and captains.

Men such as Aodh.

I think a thoughtful, curious, questing person like Aodh might have done a little experimenting on his own. And then, shared it with his woman, to help light her fire, so she could burn for him.

This name was a total play on the real-life, contemporary ‘adventurer’ Sir Humphrey Gilbert, solider, mariner, adventurer in Ireland and the New World, and half-brother to Sir Walter Raleigh.

Unfortunately, Gilbert's ‘adventuring’ in Ireland was quite viciously done. On one campaign, he put everyone to the sword, even women and children, then cut off their heads and staked them along the pathway to his tent.

Because the Irish were the savages, right?

Gilbert’s maritime adventures led him as far as the New World, and he died on one return journey; stubbornness did him in. He died on board his beloved ship Squirrel, slowly sinking, reading a book on the stern as he went down with his ship. It is believed he was reading Utopia by Sir Thomas More.

Here is a partial list of things I researched while writing Claiming Her, many of which never ended up being used, or indeed referenced even remotely in the book, because that is the way of research. It drags you under with its siren lure, then spits you out with a boatload of fascinating, useless information.

« Return to Claiming Her

“I'm still riding a serious romance high…absolutely sublime.…these two became one of my favorite romance couples of all time….Their first encounter is unexpected and exhilarating and sets the raw, witty, tug-of-war tone for the entire book…bewitching romantic adventure spilling over with intrigue, danger, wild Ireland ambience and toe-curling heat.” —USA Today, Happily Ever After, ‘Must Read Romance'

“In CLAIMING HER, Kris well and truly outdid herself. It is, to date, the best book she’s written. Aodh Mac Con, is a to-die-for hero. I fell for him like a ton of bricks…Completely addictive. Sexy as hell…boy is it fun to see him try to seduce our very headstrong heroine. Get a fan ladies, he’s scorching hot, and so are the love scenes in this book…definitely one of the best romances I’ve ever read.“– Smitten By Books, 5 Stars, Top Pick