Behind The Scenes: Writing King's Warrior

Thought it might be fun to give you a sneak peek behind the scenes at the writing of King's Warrior, which just released last week.

His plan was heartless, ruthless, and simple. Until he met her.

My plan for this story was simple, too.  (Not so much ruthless, but then I'm not an Irish warrior….)

I wanted to write a story where the hero exploits the heroine while appearing to help her, a story that would set up the new series I was starting, Renegade Lords.

I originally wrote King’s Warrior (originally titled The King’s Outlaw) for an anthology with three other author friends, Eliza Knight, Vonda Sinclair, and Jennifer Haymore, Captured by a Celtic Warrior (out of print now).  It was terrific working with these ladies, and if you haven’t checked out their stories, do!

Since my story was appearing first in the anthology, I  knew I wanted to set up a compelling, exciting ‘story’ for the dagger that the other authors were going to be working with.  But I also had to keep the storyline relatively tight, because these were all novellas—no sprawling 400 pg epics here!  And of course, it had to be über-sexy. All within a ‘captured’ theme.

I wrote and wrote, but kept writing around the story, until I wrote what is now the opening scene with Tadhg, the Irish hero of our story. He’s on the docks in a grubby little French seaport, trying to get out of town before he’s captured by the villain, and, boom, the story took off.

But that was only half of it. Because as I wrote, the story morphed and grew (of course!) and kept getting longer. This hero had a backstory, a big one, with complicated relationships that were going to yanked brought back to the forefront and tested.

Clearly this was not a novella.  And so not all of it could make it into the anthology version. But I knew Tadhg (pronounced /tie-g/) needed to have his story told.  As did Magdalena, his simple, innocent heroine, who, Tadhg is about to find out, has the heart of a lion.

King’s Warrior is their story, in a full, single title release, with loads of adventure and scorching hot passion. 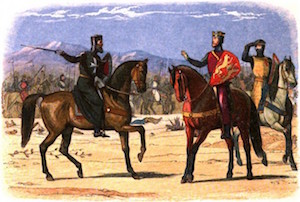 Travel to medieval France & England and get a taste of the Holy Lands with King Richard the Lionheart. Visit a sea town shrouded in darkness and corruption, sneak into hidden caves, and get snowbound in a firelit cottage with no one but a dangerous outlaw and the way he’s looking at you, firelight glinting in his eye… (Yes, there is snowbound-ness!)

I hope you love it.  Let me know; I love to hear from readers!